Sheriff Bobby F. Kimbrough, Jr. was elected to office in 2018. His passionate commitment to serving others, coupled with his diverse career experiences in law enforcement, give him a unique vision for the Office of Sheriff.

Born and raised in Forsyth County, Bobby graduated from North Forsyth High School before earning his Bachelor of Arts in Sociology from High Point University in 1991. Bobby then earned his master’s degree in Leadership from Piedmont International University in 2020. Bobby is currently working towards his Ph.D. in Organizational Leadership.

Bobby began his law enforcement career in 1984 as a Police Officer for the Winston-Salem Police Department. In 1987, he became an Arson Investigator with the Winston-Salem Fire Department while serving in the role of Assistant Fire Marshal. He then moved to work with high-risk offenders at the North Carolina Department of Probation and Parole.

From 1995 to 2016, Bobby served the United States Department of Justice as a Special Agent in the Drug Enforcement Administration (DEA). He specialized in investigating crimes against the government, including organized crime, money laundering, gang violence, and drug trafficking. Various certifications, including Department of Justice Instructor, and his fluency in Spanish afforded him the opportunity to work extensively throughout the United States of America and other Spanish speaking countries.

Bobby has nearly 40 years of law enforcement experience and brings his professional experiences and personal passions to projects throughout the community. As an active community leader, he founded Branded for Knowledge, a program focusing on strengthening, empowering, and encouraging individuals to reach their full potential. He has also established the Star of Hope Scholarship Fund with the Winston-Salem Foundation to assist students who have been victims of a serious crime. Bobby continues to hone his leadership skills, completing the Dale Carnegie Course, Skills for Leadership. Bobby also completed Becoming a Leader: Developing Your Style and Making Sound Decisions, and Emotional Intelligence in Leadership courses from Harvard University in 2020.

Despite his numerous accolades, including being an Author of three (3) books, Bobby considers being a single parent raising seven (7) sons as responsible, respectful young men to be his greatest accomplishment.

In his spare time, Sheriff Kimbrough enjoys flying, reading, and spending time with his seven (7) sons. 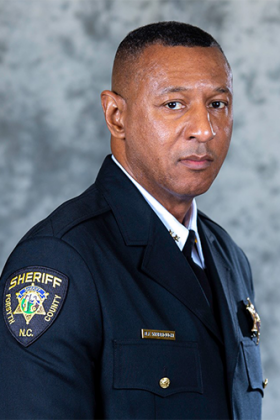