Catrina Thompson is the fifteenth Chief of Police for the city of Winston-Salem.

She is a native of Detroit, MI where she graduated from Wayne State University with a Bachelor’s of Science Degree in Criminal Justice.  Additionally, she also holds a Master’s Degree in Public Administration from Appalachian State University.

In 2018, she received the Criminal Justice of the Year Award from the Ministers Conference of Winston-Salem and Vicinity. She was also recognized by Black Business Ink Magazine as one of the 50 Most Influential African Americans in the Piedmont Triad.

In May 2021, she was named a member of the Inaugural Cohort of The Hunt State Policy Fellows Program by The Hunt Institute.

During her twenty-seven years with the Winston-Salem Police Department, Thompson has served as the Assistant Chief in charge of the Investigative Services Bureau, which is the Command Bureau over detectives and school resource officers. She graduated from the Leadership Winston-Salem, Class of 2016, 2017 Public Executive Leadership Academy of the School of Government at UNC Chapel Hill, the West Point Leadership Program of Methodist University, and the FBI Law Enforcement Executive Leadership Association program

As Chief, she leads a department with 570 sworn officers, 173 civilian positions and an annual budget of $80 million.

Her Philosophy of Life:  Shoot for the moon because even if you miss, you will land among the stars. 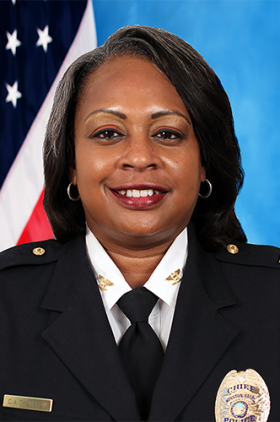