Nelson Andreu began his law enforcement career in 1980, when he was hired by the Miami Police Department.  Upon graduating from the police academy, he was assigned to uniformed patrol, as are all rookie officers.  Within two months he was transferred to the Special Police Unit (SPU) where he was assigned to work alone in the Omni area patrolling the commercial area on a three wheeled motorcycle during the Christmas season.  At the end of the holiday’s he returned to unformed patrol completing his FTO program in the Little Havana, Overtown, Liberty City and Little Haiti areas of Miami.  After approximately ten months he was requested to apply to the Homicide Unit, for an open Detective’s position by the Homicide Commander.  His application was accepted and in September of 1981, he became a Homicide Detective, becoming the first Detective in that position while still a probationary employee.  He remained as a Homicide Detective, working over a decade as a Detective in the routine section, then as a Cold Case Detective. Upon being promoted in 1995, the Command Staff in the Criminal Investigations Unit decided his investigative and supervisory skills could best serve the Department if he remained in the Homicide Unit.  Again, something that is never done since upon promotion, all promotees, are always returned to uniformed patrol for several years.

Since Nelson Andreu was in the Cold Case Squad of the Homicide Unit prior to his promotion, he was not only put in charge of the Cold Case Squad, but was also given a routine homicide team to supervise.  While most Homicide Sergeants supervised only three or four Detectives, Nelson Andreu had six investigators under his command; due to a shortage of Sergeants in the Homicide Unit.

Never one to turn down challenging responsibilities, Andreu gladly accepted the position and both of his homicide teams were frequently honored for their investigative abilities.  After a few years the Command Staff was able to obtain and additional Sergeants position and Andreu was allowed to dedicate himself exclusively to the Cold Case squad with his two seasoned investigators.  Traditionally police shootings were equally distributed among all the Homicide Sergeants, preventing any one Sergeant from being overwhelmed with the complexities a police shooting investigation entails.  However, the Command Staff again realized Andreu's investigative talent, skill, and professionalism; thus decided he would investigate all of the police related shootings that occurred in Miami.  In addition to handling all the police related shootings, Andreu and his investigative team were tasked with the Cold Case investigations of previously unsolved and open murder cases, as well as any other sensitive, high-profile, or important case which the Criminal Investigations Division Chief would personally assign to his team.

Nelson Andreu remained in this multidimensional position for many years until his honorable retirement from full-time active duty in 2002. During his tenure with Miami P.D., Andreu received hundreds of hours of training, as well as receiving over one hundred commendations, not only from the police department, but from prosecutors, judges, and citizens alike.  He received the Most Outstanding Officer of the month award numerous times and was selected for the highly coveted and prestigious Outstanding Officer award from the Dade County Association of Chiefs of Police, having earned this award and unprecedented three times.  During his 22 years with the Miami Police Department he was never disciplined for any wrong doing, improper conduct, violation of rule or policy, nor was he ever the target of any Internal Affairs investigation.  In addition to his investigative duties with the Miami Police Department, Andreu was twice detached to work a series of drug related murders; once with the F.B.I and again with the D.E.A.

During his tenure Nelson Andreu investigated some of the most serious, sensitive, and notorious cases in South Florida history.  To list just a few, he worked on five separate Serial Killer cases, dozens of police related shootings, the murder of a Miami Police officer’s mother, and the unfortunate cases involving the shooting and murder of several law enforcement officers in Miami.  Additionally, he worked for nearly ten years on the case of Griselda Blanco, known as the "black widow," after which the documentary movie Cocaine Cowboys was based and in which Andreu appeared.  He also investigated and solved a series of hired executions orchestrated by Willie Falcon and Sal Magluta.  Between Blanco, Falcon, and Magluta alone, over twenty murders were solved, all over the United States, and the perpetrators arrested by Andreu and his team of investigators.  As the senior Investigative Supervisor he was also regularly assigned as the Acting Commander’s in the Homicide Unit; often times being the Acting Commander of the entire Investigative Unit.

After retiring, Nelson Andreu remained with the Miami Police Department in a Reserve Officer capacity until 2005, while simultaneously forming a polygraph and private investigative agency.  Often called upon by the current Homicide Detectives on new as well as older Miami murder cases, Andreu continued to provide his expertise and knowledge to new investigators assigned to the homicide unit.  In addition to the aforementioned achievements, Nelson Andreu authored and had published a novel entitled "Dead Red," about a Miami Homicide Detective who himself, becomes entangled in a series of murders.  He is also a Nationally respected expert on Serial Killers and has authored a lengthy paper on this subject which has been published in the prestigious journal of the American Polygraph Association, as well as several other national police magazines.  He has traveled the country teaching in a variety of subjects including; serial killers, polygraphs, interviews and interrogations, and criminal investigations.

Not only a great student and dedicated law enforcement officer in South Florida, Nelson Andreu has helped several charitable institutions in South Florida as well as other parts of the U.S.   He has donated dozens of his books to programs such as: the Wounded Warriors, the Homeless, and Operation Shoe Box, an organization that prepares and ships care packages to our troops overseas.  He has volunteered at Sylvania Heights Elementary School, both in person by reading to the young students, and financially through their Adopt-a-classroom program.  He was also part of the mentors program at Miami-Dade College, where he mentored freshman students to help them succeed, both in school and in life.

In 2005, Nelson Andreu was called back into an active police role and was recruited into the West Miami Police Department as their second in command at the rank of Captain.  Working with Chief Gary Knowles, this team of seasoned police administrators brought new and innovative approaches to this Department.  Revamping the decade’s old policy manual, obtaining new police vehicles, upgraded armaments, and numerous other innovations has brought the West Miami Police Department into the 21st century.

Working diligently and hand-in-hand with the former chief, Nelson Andreu helped propel this department into a modern, well equipped and well trained law enforcement entity.  With many other vibrant and innovative plans for the future, Nelson Andreu promised to dedicate himself totally to the continued improvement of the West Miami Police Department and re-committing himself to the efficient, professional, and dedicated service the citizenry expect, demand, and deserve. When Chief Knowles retired in 2007, Nelson Andreu was promoted to Chief of Police, a position he held until his honorable retirement in 2020.  He remains in a reserve officer capacity at the West Miami Police officer with the rank of Executive Assistant to the current chief of police.

Often heralded as the "Dean of Miami Homicide," he has labored long and hard at solving some of the most difficult crimes in South Florida, and with this, bringing closure to hundreds of families over the decades he worked in the Homicide Unit.  Once asked how many bodies he has viewed in his career, not just homicide victims, but for any cause of death, and after some quick mental math Andreu estimated approximately 4,000-5,000.  Dealing almost exclusively with murder, blood, mayhem, and the most violent of criminals on a daily basis, Nelson Andreu still maintains an even keel in his everyday life.  Additionally, both his son, daughter and nephew are police officers in South Florida and have successfully followed in Nelson’s footsteps.  Married to Maria for over 46 years, they have remained joyfully together despite the many long hours, missed birthdays, Thanksgiving dinners, and other important events from which duty has summoned him to over the years. 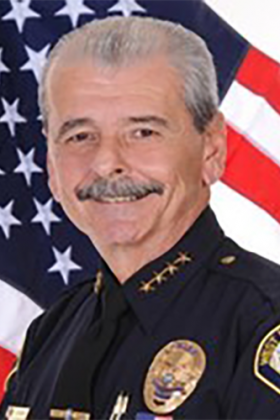